This Band Just Keeps You Rockin' 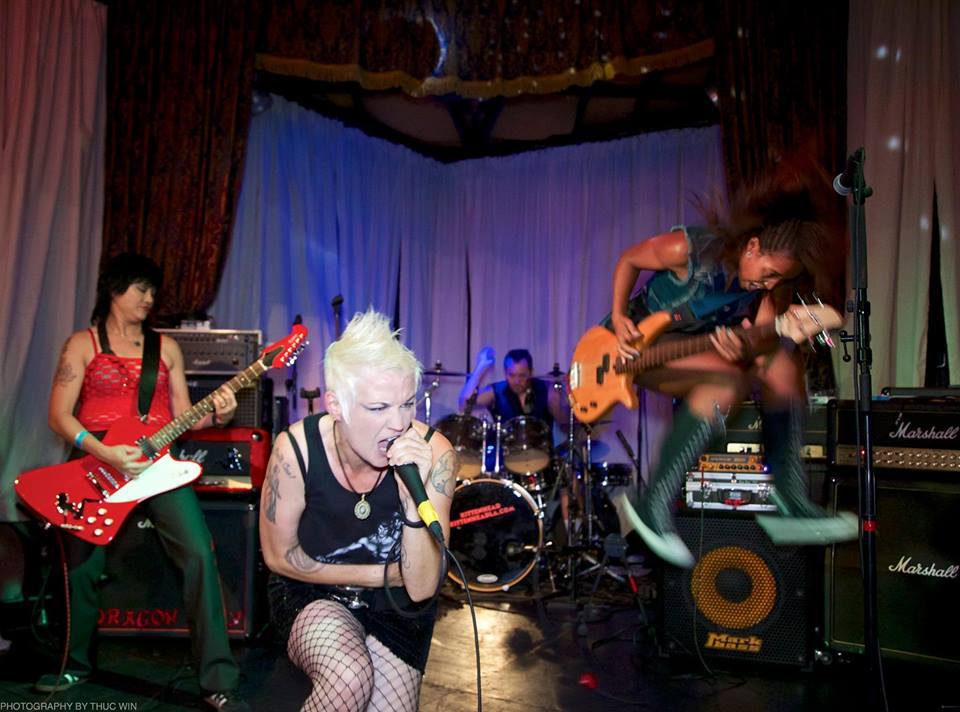 Kittenhead was started in May 2012 and is based in West Hollywood, CA,with some members located in San Francisco, CA. Kittenhead played its first live shows in September 2012 in the Pacific Northwest, with a headlining slot at the Comet in Seattle. Since then, the band has played all of the major cities on the West Coast, with fans requesting to return to flowing from every show. Kittenhead has played several West Coast Roller Derbies including the Sugartown Roller Derby, Viva Roller Derby and San Diego Derby Dolls halftime shows, where high energy was an understatement. After gigs at The Roxy (LA), The World Famous Doll Hut (Anaheim) and El Rio (San Francisco), it's time to get this show on the radio.

This band is a fast rockin wild style band, if you wan't music that fills up a room and has a meaning, then you have to check this band out. They have a style that will make you say wow and the lyrics in their songs are powerful. The singer (KIVI) will have you groovin to the soung, her energentic powerful voice is great, the lead giutar (DD) is a another female that plays with a passion, the bass player (VJJ) is yet another female that hit's the strings hard. Then there is the drumer (O-Face) this guy will not only smash the drums but will also play his heart out.

I Must say, this band reminds me a lot of "Joan Jett and The Black Hearts", they also sound a bit like "Foo Fighters" and we all know that is some heavy sounds.

They have put together some amazing tunes, like "TATOO" & "PRIVACY" that are very well written and let me tell you, the ROCK. Their new ep is full of great tunes. The one thing that seperates this band from others is their giving, they seem to always want to help out with charities. If you feel like rockin out and want to hear some great stuff, you need to check this band out.

The high energy live shows led to Kittenhead receiving rave reviews from TheLosAngelesBeat.com, Reno Tonight Magazine, and airplay on various Internet radio stations across the country, including Stench Radio. The band has played benefit shows for cancer survivors, college scholarships and loves to give their time and energy to such causes.

Great music is the experience the band wants to deliver.

Reply kd 12
8:54 PM on January 20, 2022
My wife and i ended up being very cheerful that Edward managed to conclude his web research through your precious recommendations he was given out of your site. It's not at all simplistic just to find yourself releasing guidance which a number of people could have been trying to sell. So we figure out we need the writer to give thanks to for that. These explanations you have made, the simple blog navigation, the friendships you can aid to instill - it's mostly impressive, and it's really helping our son in addition to us understand this concept is satisfying, which is certainly exceptionally vital. Many thanks for the whole lot!
kd 12 http://www.kd12.us.com

Reply yeezy shoes
2:28 PM on January 20, 2022
I truly wanted to make a brief comment so as to thank you for some of the lovely steps you are giving out on this site. My time-consuming internet lookup has now been honored with beneficial points to go over with my relatives. I 'd admit that we site visitors are really fortunate to be in a magnificent community with many special people with useful ideas. I feel very much happy to have used your entire web page and look forward to tons of more cool times reading here. Thanks once again for all the details.
yeezy shoes http://www.yeezy-shoes.us.org

Reply curry 8
1:54 PM on January 20, 2022
I am commenting to make you understand of the fine encounter my cousin's child had checking your web page. She came to find so many issues, including what it is like to have a marvelous helping character to get the others easily know precisely several hard to do subject areas. You actually exceeded her expectations. I appreciate you for churning out those essential, dependable, edifying not to mention fun guidance on your topic to Emily.
curry 8 http://www.curry8shoes.us

Reply 100% real jordans for cheap
8:48 AM on January 20, 2022
I truly wanted to write a quick comment to be able to express gratitude to you for those wonderful strategies you are giving on this site. My prolonged internet search has finally been recognized with useful tips to share with my friends and family. I would declare that many of us site visitors actually are undoubtedly blessed to be in a wonderful website with very many wonderful individuals with good tips and hints. I feel truly fortunate to have come across your weblog and look forward to many more fun moments reading here. Thank you once again for a lot of things.
100% real jordans for cheap http://www.jordansforcheap.us.com

Reply air jordan
5:03 AM on January 20, 2022
Thanks so much for giving everyone an exceptionally pleasant chance to check tips from this website. It really is very terrific plus full of a great time for me and my office friends to search your blog the equivalent of three times per week to read through the fresh guidance you will have. And lastly, I'm so certainly fulfilled with all the surprising creative ideas you serve. Certain 4 ideas on this page are in reality the finest I have ever had.
air jordan http://www.jordanshoes.us

Reply supreme new york
2:42 AM on January 20, 2022
I have to express my affection for your kindness giving support to those people that must have help with this particular concern. Your real dedication to passing the solution all around was amazingly helpful and have in most cases allowed employees like me to realize their dreams. Your interesting help and advice signifies much a person like me and somewhat more to my peers. Thanks a lot; from each one of us.
supreme new york http://www.supremenewyork.us.com

Reply longchamp handbags
3:14 PM on January 19, 2022
I definitely wanted to type a quick comment to be able to appreciate you for the wonderful hints you are writing at this site. My long internet look up has finally been honored with good information to go over with my neighbours. I would admit that we visitors actually are rather blessed to dwell in a wonderful community with very many wonderful individuals with useful ideas. I feel really lucky to have seen your entire webpage and look forward to plenty of more pleasurable minutes reading here. Thanks once more for all the details.
longchamp handbags http://www.longchampshandbags.us.org
123...15Next »