A Band That Just Plain Rocks! 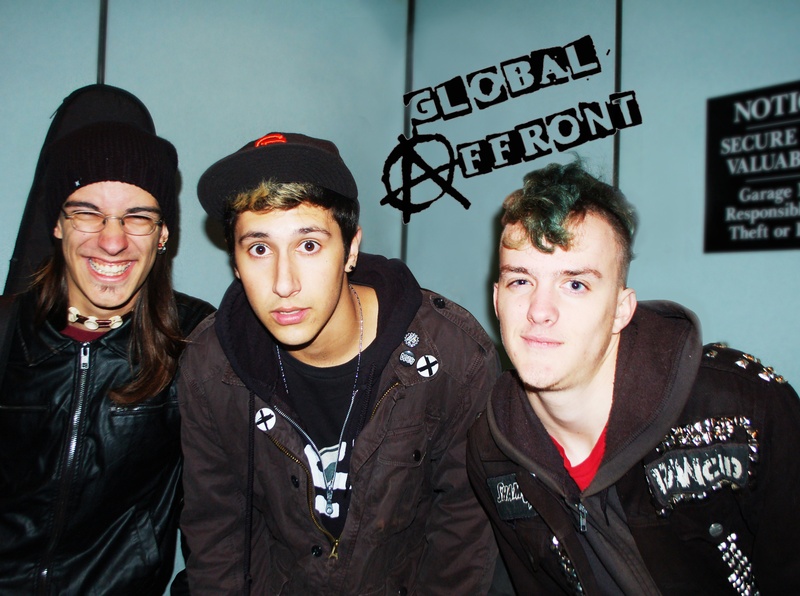 Global Affront was formed in 2009 in the San Francisco Bay Area by Eric Wellington and Rico Colley. They began by playing Nirvana, Sex Pistols and Green Day covers, but were inspired to write original material in response to the 2009 Oakland BART shooting and the riots that followed.

After recording and releasing their debut (self-titled) EP in 2011, they started to build a following and were booked to play venues such as the legendary Continental Club in Oakland and The DNA Lounge in San Francisco. The band’s song lyrics, while always based in solid punk angst, began to evolve and incorporate themes of social and political injustice. In 2012, Colley and Wellington recruited Shane Hunt-Dussé as their bassist and the band recorded their second EP, "Another Fucking Global Affront EP."

The EP was released during the finals of the 2012 San Francisco Battle of the Bands, where Global Affront beat out more than 100 bands to take first prize. In early 2013, Global Affront teamed up with SF Suicide Prevention and instituted an annual benefit concert with all proceeds going to this important cause. In the summer of 2013, Global Affront set out on their first cross country tour, hitting world-famous spots like 924 Gilman in Berkeley, Whisky A Go-Go in Los Angeles, Sullivan Hall in New York City, and others. Global Affront will release its debut full-length album, "It's All Downhill From Here," in 2014.

This band has some very good lyrics along with a smooth swag style that will have you bangin your head and singing along, they rock out with every song at the shows and will leave you wanting more. This band has some great tunes like "Revalution" & "You're A Lie" that hit the rockin spot for sure.

Other songs like "Make Way" show the bands complete style with great bass and drums. The songs are classy and have a fast paced rythem and a shocking vocalist.

Hit the band up on their facebook fan page right HERE.

Reply albuterol 0.83
8:00 PM on November 24, 2021
modafinil and mdma where can i buy modafinil mild partial seizures with provigil how much was provigil generic

Reply 25 mg prednisone
1:50 PM on November 18, 2021
plaquenil and bruising plaquenil 200mg buy plaquenil and lower back pain what can i do to combat the side effects of plaquenil